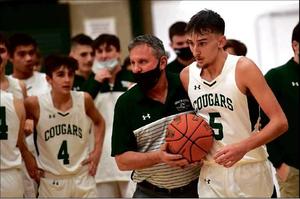 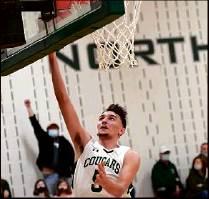 BOSWELL — North Star senior Hunter Stevens led all scorers with 26 points, while also reaching the 1,000-point milestone in the second quarter, as the Cougars took down Blacklick Valley 57-41 on Wednesday night.

“What can I say, it is cool and all, but I need to thank my coaches and teammates,” Stevens said. “They are the ones that have pushed me every single day for three years to help me get to this point. This is cool, but our main goal is to get that three-peat, and that is what I am focused on.”

North Star head coach Randy Schrock said he is proud of his senior, who has been an integral part of the lineup since his sophomore season.

“It is just four years of hard work and dedication,” Schrock said. “He is the guy that gets us going and is the motor for our team. He is a special athlete that you don’t get through your program very often.”

Earlier in the season, Stevens was forced to miss several weeks of action with a broken fibula and a severely sprained ankle. Since returning just over a week ago, the senior has been on a tear as the countdown was on to hit the 1,000-point milestone.

Stevens started the game going 0-for-4 shooting through the midpoint of the first quarter, but the senior eventually found his rhythm after hitting his first shot.

“It was just nerves,” he said. “But once that first one fell, I finally got going.”

The milestone came after back-to-back steals for Stevens that resulted in layups at the other end. He reached the mark at 3:54 of the second quarter, where his basket gave the Cougars a 26-16 lead.

“Defense is what I think I am best at, and it is nice to get steals to create offense on the other end,” Stevens said. “It was nice to get it with all my family and friends here to see me do it.”

Stevens’ initial diagnosis a month ago was to miss six weeks of action, if not the season. The senior attacked his rehab and was able to make it back in just over three weeks.

“It was a battle for sure. I hit therapy at least three days a week.” Stevens said. “Once I got cleared, I came to practice even though I was sore every day and I pushed through it. When the injury happened, it was a tough time for me, as I thought the season was over, but once I got back, I was just so happy to be back and with my teammates.”

North Star has now moved back above the .500 mark at 8-7 after winning their third game in the last four days.

Fellow senior Drew Lane led the team with 11 rebounds, while tallying eight points coming off the bench. Brock Weimer also added eight points in a balanced showing for the Cougars. Eight players made the score sheet to help the Cougars depth wear down the visiting Vikings.

ONE AT A TIME

After taking a 14-10 lead at the end of the first, North Star took it one frame at a time and was able to outscore Blacklick in every quarter to capture the victory.

The Cougars only trailed until two minutes left in the opening quarter when back to-back baskets by Lanegave North Star the lead for good.

ON THE ROAD AGAIN

North Star will now head to Portage to take on the Mustangs, Wednesday. The Cougars will be facing a tough stretch, with six of their final seven games on the road.

Schrock said his team is ready for the challenge.

“Hunter is not at 100% yet, but since we got him back in the lineup, we are starting to hit our stride,” he said. “He really recouped and worked hard to get back into this lineup, and is probably at least a week ahead of schedule. His hard work and grit is what got him back to us, and we sure needed him.”