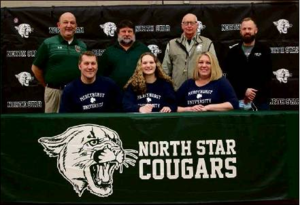 It has been quite a career for Sydnee Ashbrook as a member of the North Star volleyball team.

All of this is on top of leading the Cougars to three District 5 championships.

After spending countless hours practicing and working in the gym to perfect her craft, Ashbrook can say all of her hard work has paid off, as the senior officially signed to play volleyball at Mercyhurst University on Feb. 4.

“Choosing a college was one of my biggest stresses. Now that I have it selected, I’m definitely ready to go. I had a lot of support for this. I’m blessed with all of the people that were with me. Without them, I wouldn’t be successful or in this position.”

Ashbrook intends to enter a forensics or chemistry major while suiting up for the Lakers under tenured PSAC coach Ryan Patton.

She said the campus and team atmosphere is what drew her to the Division II school in Erie.

“I love the way the coaches do their coaching,” Ashbrook said. “They have a different way of approaching things that really got my attention. I also love the team. I met some of the girls already. They and the coaches were very welcoming.”

Crisafulli spoke highly of Ashbrook, saying he was happy that she found a right fit for the next step of her athletic and academic career.

“That’s usually the biggest battle,” Crisafulli said. “A player can sign anywhere, but they have to be comfortable with where they are going. Like for all kids, it’s a big adjustment, but I think she is ready. I know coach Patton rather well, and I know he’ll appreciate Syd down the road. She will definitely do well there.”

Ashbrook’s performance during her senior campaign will give her a suitable opportunity to make an impact early at the next level.

The 5-foot-10 middle hitter compiled 303 kills and passed 1,500 for her career during the season. Ashbrook also compiled 40 aces, 55 blocks and 62 digs, while also being chosen to play in the 34th Greater Johnstown Volleyball Club Johnstown Area versus Somerset Area All-Star match.

“She was our go-to player all year,” Crisafulli said of Ashbrook. We knew we could count on her tremendously. She became someone we relied on, particularly on offense. Whenever we needed a point, she was the one we looked to for a spark or to get our momentum going.”

Ashbrook added that she will stay at middle hitter when she enters her first collegiate season this coming fall.

Overall, Ashbrook said she has many great memories of her career at North Star, but none more than competing in the playoffs with her teammates. She added she wants to thank them, as well as her family and coaches, for everything they’ve done.

“My family was always there, coming to watch me play,” she said. “My team always had my back. They supported me through everything, and especially picked me up when I was down. Coach Crisafulli helped me become the player I am. I can’t thank all of them enough.”