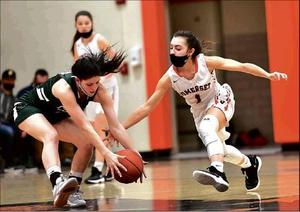 SOMERSET — Cenley Miller dropped a game-high 17 points, including 11 in the fourth quarter, Steph Emert added 13 points and North Star did just enough defensively to hold on and beat Somerset 57-51 on Tuesday night.

The non-conference victory for the Cougars snapped a five-game skid dating back to Feb. 9. “You definitely want to be trying to play your best basketball at the end of the season,” said North Star coach Joe Zimmerman on the much needed win. “We’ve kind of had a rough past two weeks. It was good to get a win here tonight and hopefully get us some momentum moving forward.” Syd Ashbrook provided 11 points for the Cougars. Emma Hause chipped in nine points. FOURTH QUARTER HEROICS After Somerset’s Shawna Walker tied the game at 41-all with a layup, Emert came right back and drilled a triple to give the Cougars the lead back for good.

Somerset fought back to make it a 2-point game with three minutes left, but Miller hit a dagger three with just over a minute to play to push North Star’s lead to nine, 53-44. The Cougars’ junior point guard was 6 of 9 from the free throw line in the fourth quarter and scored seven of her team’s final nine points. “She’s a hard worker and gives you her best effort,” said Zimmerman about Miller’s second half performance. “For her to be able to do that, that was big, and it really helped the team.” EARLY SLUMP North Star found itself down 10-1 midway through the first quarter. The Cougars were just 4-of-15 from the field in the first, but ended the quarter on an 8-3 run to cut the deficit to four. But in the second, the Cougars held the Golden Eagles to just four points, and a 3-pointer by Emert with 1:45 to play in the first half gave North Star its first lead, a 20-17 advantage that it took into halftime. GROWING PAINS Somerset senior Karlee Bittner had a team-high 13 points. Sophomore Gracie Bowers added 12 points, including seven in the first quarter. The Golden Eagles, who are still without a win this season, suffered through multiple, long scoring droughts throughout the second and third quarters. The Golden Eagles’ inexperience showed up down the stretch as they turned the ball over four times in the final three minutes. Having only eight players available did not help the situation. “Obviously, we wanted to come out with a victory,” Somerset head coach Jill Kegg said. “But having a competitive game like these ones are what the program needs in order to be able to understand game situations at the end of a game. “A lot of these girls aren’t used to being in that close of a game. It’s something that we just have to build a culture for.” Somerset used a 7-0 run to cut North Star’s lead to four, 28-24, early in the third quarter. But after losing the lead towards the end of the first half, the Golden Eagles never got back on top.UP NEXT Somerset (0-8) hosts Forest Hills today. North Star (6-11) travels to Conemaugh Valley, Monday.