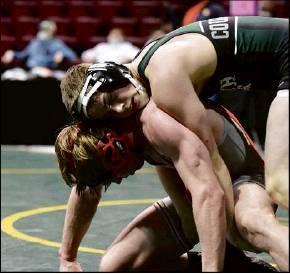 Jalen Stephens and Connor Yoder were the only two Somerset County wrestlers to advance from the Southwest Regional Class AA tournament on Saturday at IUP.

Stephens, the topranked 285-pounder in the state, finished second, while Yoder, a freshman, placed fourth at 145 pounds.

Marion Center’s Marvin Beatty scored a pair of takedowns and an escape in a 5-0 victory over Stephens in the final bout of a long day at the Kovalchick Convention and Athletic Complex in Indiana.

“He needs to be more aggressive and attack more,” Meyersdale coach Christian Hutzell said of Stephens, who is a two-time state medalist and won the regional title at 285 last season. “He knows that. I told him we have a week to work on it. The first takedown in that match was big. We have a few things to work on.”

Meyersdale’s other qualifiers each went 0-2 in the tournament.

Trevor Donaldson dropped a 6-3 decision to Carlynton’s Bryce Rodriguez at 120 pounds, then fell 4-2 in sudden victory to Burgettstown’s Gaven Suica.

Austin Broadwater, who won the District 5 title at 160 pounds for the Red Raiders, lost by fall to Carlynton’s Oleg Melnyk and Beth-Center’s Trevor Pettit.

Bryant Most dropped a 3-0 decision to Ethan Yingling at 215 pounds, then lost by fall to Philipsburg-Osceola’s Parker Moore.

“I could say I was disappointed in the effort, but I feel like we could have won every match,” Hutzell said. “Sadly, Austin Broadwater’s and Bryant Most’s careers ended today. They’ve had excellent careers for us. Trevor Donaldson wrestled well. He’s coming back next year. We’ll take the good where we can get it.”

The same could be said for most of the county wrestlers.

Yoder will join Stephens as the only qualifiers for the West Super Regional tournament to be held Saturday at IUP.

The North Star freshman beat Glendale’s Zeke Dubler 3-1 in the opening round before losing 15-3 to eventual champion Grant MacKay of Laurel. A 2-1 victory in Tiebreaker 2 over Quaker Valley’s Justin Richey assured Yoder of a spot in the super regional before a 6-4 setback to Westmont Hilltop’s Hudson Holbay left him with fourth place.

“I thought I wrestled pretty well today,” Yoder said. “Obviously, it could have been a little better, but overall, I’m pretty happy with it.”

So was his coach.

“He’s a gutsy kid. He works hard. I’m excited to see what he can continue to do.”

North Star’s Nathan Pelesky saw his fine high school career come to an end at 113 pounds. Pelesky dropped a 5-0 decision to eventual champion Chris Vargo of Bentworth in the quarterfinal round. Pelesky rebounded with an 11-1 victory over Laurel’s Colin Bartley in a battle of returning state qualifiers before losing a tough, 1-0 match to Elizabeth Forward freshman Damon Michaels.

With a spot in the super regional on the line, Pelesky was pinned by Chestnut Ridge’s Calan Bollman, who entered the day as the top-ranked wrestler in the state, but suffered a pair of upsets.

“Obviously, we hoped to get more but that 113-pound bracket ended up being landmine after landmine,” Rosa said.

Seeing Pelesky fall short of his goal of becoming a state medalist was difficult for Rosa to watch.

“There’s a couple tough ones over the years, and he’s near the top,” Rosa said. “He worked really hard this year. He did all of the right things. He didn’t take any shortcuts. When you see stuff like that happen to kids, it hurts a little more. He’s a good kid. He’ll rebound. He’s got a bright future ahead of him.”

Conemaugh Township freshman Tristen Hawkins lost his two bouts at 106 pounds. The District 5 champ fell 4-0 to Bald Eagle Area’s Lucas Fye in the quarterfinals and 2-0 to Tyrone’s Korry Walls, who scored a late third-period reversal in their consolation match.

Berlin’s Brady Boburchock, who pinned Most for the District 5 title at 215, also went 0-2. The Mountaineers senior was pinned by Collin Milko of Carlynton in the quarterfinal round, then fell 7-1 to Knoch’s Eli Reese in the consolation bracket.

Grant Mathias, Boburchock’s 172-pound teammate, lost by fall to Mc-Guffey’s Ethan Barr in the quarterfinal round, then dropped a 6-1 decision to Mount Pleasant’s Noah Gnibus.

Somerset’s Ethan Hemminger, the District 5 champion at 145 pounds, lost a pair of matches to state-ranked wrestlers. He was pinned by No. 5 Tyler Cymmerman of Derry Area in the quarterfinals, then fell 7-4 to Richland’s Cooper Warshel in a first-round consolation match.