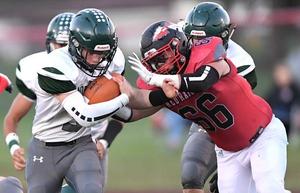 The Cougars erupted on offense and recorded two two pick 6's on defense in a 47-0 rout of the Red Raiders.

"Offense played well, defense played well," said North Star coach Bob Landis. "I know they (Meyersdale) have some injuries that they're working through now. Our guys showed up and executed well tonight."

Play of the game: North Star's Bryce Shroyer intercepted a Drake Sellers pass and returned it 42 yards for a touchdown early in the third quarter.

Player of the game: Connor Yoder completed 11 of 16 passes for 193 yards, three touchdowns and an interception. He added 68 rushing yards and a score on 15 carries. Yoder also made three PAT's.

"We go as Connor goes," Landis said of his sophomore signal caller. "Offensively, everything runs through our quarterback - run game and passing game. We were able to find the big guy (Ethan Yoder) down the field tonight several times. Things clicked for him tonight."

Unsung hero: North Star wide receiver Carter Weible caught five passes for 57 yards and a touchdown. He also stepped in front of a Sellers pass and took it to the house for a 29-yard touchdown with 2:01 left in the first half.