North Star back in win column 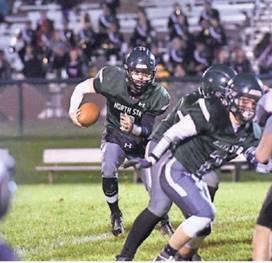 'We (made) a lot of mistakes,' North Star coach Bob Landis said about the second half of the game. 'A lot of corrections need to be made. It starts with our discipline. We sometimes let our emotions get to us. That was evident tonight. They’re passionate about trying to win a football game, so I understand it, but we have to get that under control.'

Play of the game: Carter Weible hauled in an 18-yard touchdown pass from Connor Yoder to give North Star a 12-2 lead with just 5.5 seconds left in the second quarter.

Player of the game: Connor Yoder started the scoring against the Vikings on Friday with a rushing touchdown. He carried 23 times for 145 yards and a score. Yoder went 11 of 20 for 151 yards passing and two touchdowns.

North Star made the necessary adjustments on offense to have some success against Blacklick Valley.

'We went to some double-wing formation there,' Landis said. 'Double side cars up there, to kind of gives us a two-way go, as far as that stuff goes. That was kind of the adjustment, to have no tight end. Bryce Shroyer stepped in when we did run some tight ends and did a nice job for us. Our offense is heavily based on quarterback play. (Connor Yoder) played well tonight. Our linemen played well. I thought for the most part. I gave them time to throw the ball a couple times around. I think Bryce Shroyer had a pretty good night, flying around making plays there.'

Things have not been easy for the Vikings this season. They continue to battle, but have not put it all together to find the winning formula.

'The kids played hard. That’s a really solid, physical high school football game,' Blacklick Valley coach Rich Price said. 'Our defense played hard as heck, and we always do. Offensively, we ran the ball tonight. I was so proud of our offensive line. We had a lot of good things tonight.

'Frustrating doesn’t come into my mind. It’s effort. That’s the bottom line. We give effort every second of every game, and we’re going to continue to do that. These kids play so hard. Every team we play against, their coaches, their players, they come up to me and say how tough our kids are and how hard we play. We’re going to continue that tradition. That’s Blacklick Valley football.'

Unsung hero: North Star wide receiver Mitchel Pristas, who is also the backup QB, caught five passes for 59 yards and a touchdown. It is the most catches he has had in a game this season.